This past Tuesday, Jan. 3rd, I hiked Mirror Lake. 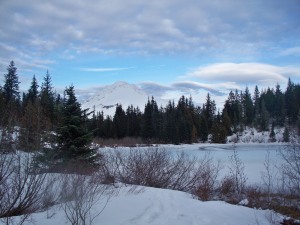 Great little hike, beautiful terrain, fresh mountain air. Unfortunately, misfortune struck when my car broke down while I was heading home, and as we speak I’m awaiting news on whether or not they can revive her. I don’t want to think about what this would mean for my year of treks, because it makes me upset, so I’m keeping my fingers crossed and hoping for good news.  Anyway, on with the trek!

Mirror Lake was fairly easy to get to from Portland. Just a straight shot up US 26 E, it took me just over an hour to get to from my apartment.  It’s nestled up by Government Camp, and this time of year was completely snow-covered.  I was quite excited, as I haven’t trekked through any amount of snow since moving to Oregon, so just seeing it from the trail head got me giddy.

And alas, here’s where I learned my first rookie mistake. (Side note: I learned a few rookie mistakes from this trek. I have a feeling this year will also be a year of learning experiences for me as well.) Foolishly, not realizing Mirror Lake’s proximity to Mt. Hood (ie: on it), I did not dress appropriately.  While I was warm in my long sleeved shirt, hoodie, coat with hood, yoga pants, ear wrap and gloves, I chose sneakers (which were not at all waterproof) over boots. Just a brief quarter mile in, and my socks were wet from trudging through the snow.  This made the ensuing 3+ miles very uncomfortable for my feet. By the end of the trek, I had two rather lovely blisters from wet socks rubbing against my feet. Hiking in the Gorge, my sneakers were just fine, but obviously in higher elevations I need protection from snow and mud. And also, for better traction. I slipped and slid around that trail *a lot*. So on the agenda are to find a good pair of hiking boots.  Anyone in the Portland area have suggestions on where to go for those?

The trail itself starts out rather flat as you make your way into the forest. About a quarter mile in, it begins ascending.  All the way up to the lake is a long series of switchbacks that to me seemed to only get steeper. Now, in both trail books I have, the Mirror Lake trek was rated “easy”.  But hot damn, just one mile in, I was winded. I stopped by a fallen tree, dusted away some snow, and sat to catch my breath for a good 5 minutes.  The combination of my being rather out of shape, the elevation on the mountain, and the trudging through thick snow definitely made this hike more difficult for me than probably most fit people who take it in the summer.  I’m almost ashamed to admit I thought of turning back and heading back down, and trying again another time.  But I drove all the way out there, I was on the trail, and was at least halfway up to the lake. I decided I was just going to catch my breath and keep going.

And I’m glad I did. Mirror Lake itself was so lovely, and incredibly charming covered in snow. I would estimate that the loop around the lake is a good mile, and not as well broken in as the path up to it.  On more occasions than I can count, I would take a step and my entire leg went clear through soft snow up to my thigh.  Then there are these creek crossings, where just a thin plank of wood covered in ice and snow could get you across. I took these slowly and cautiously, and miraculously didn’t slip off a single one (which I counted as a victory itself).

As I rounded Mirror Lake at the halfway point, the view literally knocked my breath away.  Amidst a clear blue sky and clouds that looked like jellyfish, stood the peak of Mt. Hood in its full splendor.  I was in total awe of its beauty. I made a mental note to come back in summer so I can actually see the mirror image from the peak in the lake itself, which I imagine is stunning. But seeing it there, snow-capped in January, was just gorgeous.

After looping around the lake, I made my descent, which was much less strenuous than the ascent. However, there were many, many occasions in which I so desired having a walking stick to help me get through particularly icy passages.  Another item added to my hiking shopping list. I was thinking a nice collapsible one I can keep in my backpack would be nice. Again, any suggestions welcome.

I was surprised on my descent how quickly the sky was darkening. By this time it was getting on past 4pm, and if I had spent any longer on the trail, I would have gotten caught in the dark for sure, which would have been absolutely no bueno, as I realized another rookie mistake, which is that I didn’t bring a flashlight. I caught the tail end of daylight in the nick of time, but I need to bring one in the future for sure.

Overall, it was a really nice 3.4 mile trek that took me approximately 2 hours to complete.  The guidebooks say it’s one of the busiest trails near Mt. Hood throughout the summer, but on my entire trek I only passed one couple on my ascent and three guys who were camping at the lake. During my descent, I didn’t pass a single person. Which brings me to another personal accomplishment, in that this is the first hike I have ever done by myself.  Being a city girl all my life, nature is sort of a big, sometimes scary mystery to me, so I’ve always hiked with a companion. However, I found the solitude of the snow-covered trail to be rather wonderful. I can honestly say, while I love hiking with companions, I will now look forward to solo hikes as well.

Below are the photos of my Mirror Lake trek, complete with one I took of myself using my camera’s timer (which was tricky to find a spot amidst all the snow to rest my camera). My favorite photos are of the Mt. Hood peak.  Enjoy!