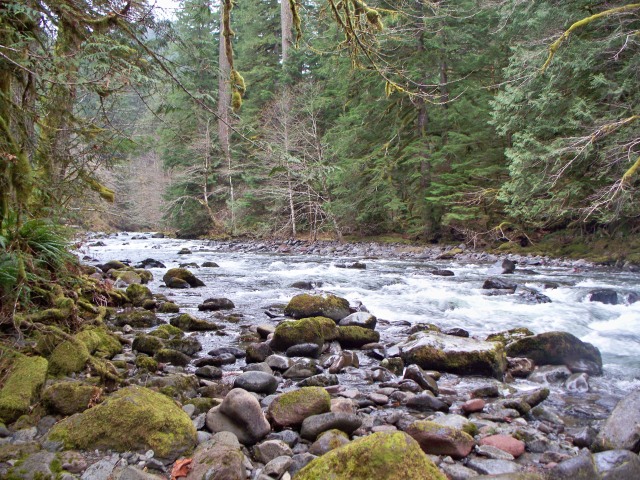 This trail is a very beautiful, yet non-cardio intensive 5 1/2 mile out and back trek nestled along the Old Salmon River in Welches, OR.  I went with my friend Sarah and her trusty companion puppy, Penny.  The weather was rainy, but with all the tree cover we barely felt it.  While trekking parallel to the river was very pretty, the real gorgeous views were the ancient growth on the ground, the trees, along the river and on the rocks: 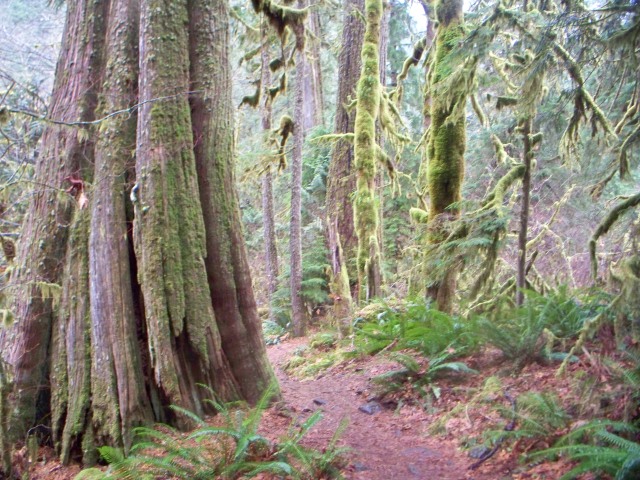 Walking along this trail, I had envisioned what nature must have looked like during the time of the dinosaurs, before anything was ever touched by man. Centuries of moss growth covered nearly everything, giving our surroundings a truly ancient feel.

Finding the trail head was fairly easy. Just a straight shot down 26 E (though Sarah did find a shortcut to a further point in 26 E by hopping on freeway 84 E). Once you get 16 miles past Sandy, you’ll hit a little town called Welches. Turn right down a road by the (only?) grocery store, and 3 miles down you’ll find the Old Salmon River trail head.

There are actually 5 entrances to the hike along the trail, but the first one you come to is the actual trail head, and the starting point. Since this trail is also popular with anglers, I suppose some of the middle entrance points are more convenient to them. But if you want to get the full trek in, begin at the trail head.

Heading down from the trail head is actually the steepest point of the hike, as it’s a fairly steep descent down for perhaps a quarter mile. But then the trail evens out, and remains fairly even for the duration of the 5+ miles.  The trail is very well worn and easy to follow. I was surprised with its proximity to Mt. Hood there was zero snow on the ground, which was also to my relief since I still need to acquire waterproof hiking boots.  There were a few sticky, muddy spots, but they were fairly easy to navigate around.

The biggest surprise of the trek is a river crossing.  On all the research of the trail I did ahead of time, no one mentioned you had to cross a flowing river with no bridge to help you.  This proved tricky, since there wasn’t even a helpful rock formation you could hop to from one stone to the next.  I debated just taking off my socks and shoes, hiking up my pants and walking it, but Sarah advised against that (which proved wise, considering how cold the water was and how much more slippery the bottom of my feet are on the rocks versus my shoes). Instead we cautiously made our way across the river from the shallowest point we could find to the next shallow point. Sarah went first, and once she reached the other side, I was halfway through the river and she tossed me a sturdy branch to use, which helped immensely to keep my balance during the crossing. We kept it tucked next to the path to use for our way back. The return crossing was much, much easier with the stick, as I was able to keep my balance on each rock I landed on. You can see in the photos Sarah took of my crossing, complete with victory pose when I reached the other side 🙂

The only other unexpected trail happenings were the two times the trail takes you back onto the road. The first time we thought we found a trail entrance from the road we were wrong, as we quickly found ourselves surrounded by growth and nothing resembling a path. We backtracked to the road and kept going, and very soon found a wooden sign telling us the trail continued. So for anyone venturing onto this trail, only re-enter the hike when you come upon entrance points with signs. All other “entrances” are not part of the trek.

At 2.5+ miles in, you will reach a big bridge. This is the turn around point. I have no idea what lies beyond the bridge, but it’s no longer the trail, since the bridge meets up with the road.  On the way back, it’s almost like experiencing a new trail, as you see different river views and growth you passed on your way out.  Take in the fallen trees that have sprouted newer plant life and moss so thick it looks like carpet.  Notice how clear and blue-green the river is. See if you can feel like that was how nature must have seemed in prehistoric times.

Overall the trek took us about three hours, including the snack break we took and the time it took us to strategize the river crossing. The other thing about the river crossing, is I imagine in summer it’s much easier to cross. The water might be a trickle with rocks you can easily walk over, but in mid-winter the current was flowing and the water was wide. I also imagine in hot summer, the Old Salmon River is a great spot to wade/swim in and cool off. I would definitely recommend this trek for anyone of all fitness abilities, and of course, don’t forget your camera.